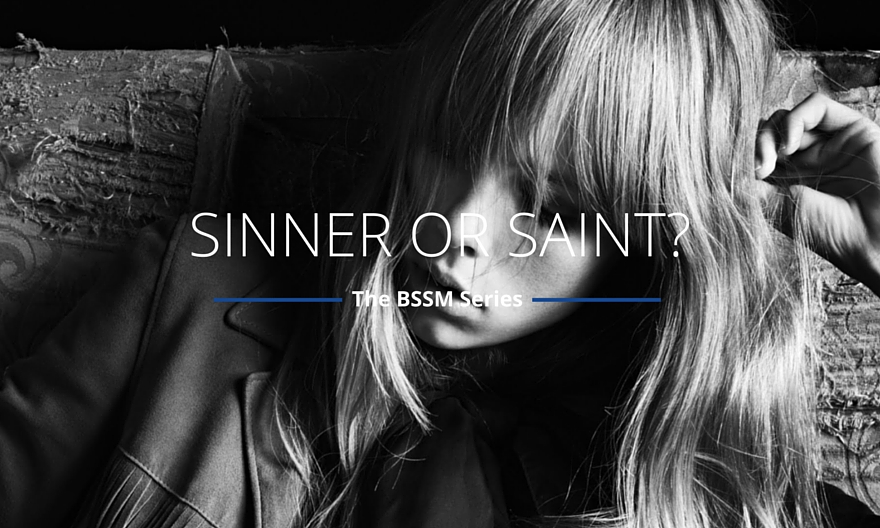 I love this quote from Kris Vallotton: “You always reproduce on the outside what you believe you have on the inside. You need to get the Kingdom on the inside to reproduce Kingdom all around you.” This is a great teaching on identity. When you know the truth that you are not a sinner, but a saint, it changes your entire world view. As Kris mentioned: “If you put a prince into a prison, he will change the prison into a palace.” This is the place from which we need to live. We are powerful and whole in Him, equipped with everything we need to change the atmosphere around us!

Are you a sinner or saint? If you are a born again Christian, you can confidently say: “I’m not a sinner – I’m a saint.”

This is contrary to what I’ve been taught as a child. Preachers always gave me the impression – whether it was intentional or not, I’m not sure – that I am a wretched human being who will forever struggle through life as a sinner. This isn’t true. In fact, it’s a diabolical lie. Here’s why:

To understand Romans 7, you need to first read Romans chapter 1-6 and chapter 8 in their proper context.

If you’re a new creation in Christ, struggling with sin is not a ‘normal’ part of your life. Yes, sin might still be common in your life, but there is a difference between common and normal. ‘Normal’ implies that sin defines your identity, but it doesn’t. The truth is that you are not a sinner, but a saint.

“Therefore, just as through one man sin entered the world, and death through sin, and thus death spread to all men, because all sinned— (For until the law sin was in the world, but sin is not imputed when there is no law. Nevertheless death reigned from Adam to Moses, even over those who had not sinned according to the likeness of the transgression of Adam, who is a type of Him who was to come. But the free gift is not like the offense. For if by the one man’s offense many died, much more the grace of God and the gift by the grace of the one Man, Jesus Christ, abounded to many. And the gift is not like that which came through the one who sinned. For the judgment which came from one offense resulted in condemnation, but the free gift which came from many offenses resulted in justification. For if by the one man’s offense death reigned through the one, much more those who receive abundance of grace and of the gift of righteousness will reign in life through the One, Jesus Christ.) Therefore, as through one man’s offense judgment came to all men, resulting in condemnation, even so through one Man’s righteous act the free gift came to all men, resulting in justification of life. For as by one man’s disobedience many were made sinners, so also by one Man’s obedience many will be made righteous. Moreover the law entered that the offense might abound. But where sin abounded, grace abounded much more, so that as sin reigned in death, even so grace might reign through righteousness to eternal life through Jesus Christ our Lord.”

YOU CANNOT SIN ON ACCIDENT‭‭

There is a difference between sin and making a mistake. You cannot sin on accident. You always sin on purpose.

Sin is always a condition of the heart. Sin says, “I knew it was wrong but I did it anyway.”

“What shall we say then? Shall we continue in sin that grace may abound? Certainly not! How shall we who died to sin live any longer in it? Or do you not know that as many of us as were baptized into Christ Jesus were baptized into His death? Therefore we were buried with Him through baptism into death, that just as Christ was raised from the dead by the glory of the Father, even so we also should walk in newness of life. For if we have been united together in the likeness of His death, certainly we also shall be in the likeness of His resurrection, knowing this, that our old man was crucified with Him, that the body of sin might be done away with, that we should no longer be slaves of sin. For he who has died has been freed from sin. Now if we died with Christ, we believe that we shall also live with Him, knowing that Christ, having been raised from the dead, dies no more. Death no longer has dominion over Him. For the death that He died, He died to sin once for all; but the life that He lives, He lives to God. Likewise you also, reckon yourselves to be dead indeed to sin, but alive to God in Christ Jesus our Lord. Therefore do not let sin reign in your mortal body, that you should obey it in its lusts.”

“For the wages of sin is death, but the gift of God is eternal life in Christ Jesus our Lord.”

The Law told you all the things that are wrong with you and why you need a Saviour. But it didn’t give you the power to change. What Paul describes in Romans is that when he knew the Law, but not God, sin mastered him.

“For as many as are led by the Spirit of God, these are sons of God. For you did not receive the spirit of bondage again to fear, but you received the Spirit of adoption by whom we cry out, “Abba, Father.”

ADVERSITY INTRODUCES A MAN TO HIMSELF‭‭‭

Intimacy can be described as ‘In-to-me-you-see’.

The best thing you can do for your marriage (or any other relationship, for that matter) is to love yourself. When you receive Jesus into your heart, you become a whole human being: Spirit, soul and body. Don’t forget about the soul and body. It is not healthy to ignore the needs of your soul and body and only nourish the Spirit. Balance equals wholeness.

The Lord gave you a palace – it is called Earth. If you take a prince and put him in a prison, he will turn it into a palace. You always reproduce on the outside what you believe you have on the inside. You need to get the Kingdom on the inside to reproduce Kingdom all around you.

You get revelation when you read the Bible to learn, not to prove something.

The Kingdom says that we need to hold our marriages in high honour. Sex was before sin.

“… by which have been given to us exceedingly great and precious promises, that through these you may be partakers of the divine nature, having escaped the corruption that is in the world through lust.”

“For the grace of God that brings salvation has appeared to all men,”

“Therefore, if anyone is in Christ, he is a new creation; old things have passed away; behold, all things have become new. Now all things are of God, who has reconciled us to Himself through Jesus Christ, and has given us the ministry of reconciliation, that is, that God was in Christ reconciling the world to Himself, not imputing their trespasses to them, and has committed to us the word of reconciliation. Now then, we are ambassadors for Christ, as though God were pleading through us: we implore you on Christ’s behalf, be reconciled to God. For He made Him who knew no sin to be sin for us, that we might become the righteousness of God in Him.” [Emphasis mine]

“However, we speak wisdom among those who are mature, yet not the wisdom of this age, nor of the rulers of this age, who are coming to nothing. But we speak the wisdom of God in a mystery, the hidden wisdom which God ordained before the ages for our glory, which none of the rulers of this age knew; for had they known, they would not have crucified the Lord of glory. But as it is written: “Eye has not seen, nor ear heard, Nor have entered into the heart of man The things which God has prepared for those who love Him.” But God has revealed them to us through His Spirit. For the Spirit searches all things, yes, the deep things of God. For what man knows the things of a man except the spirit of the man which is in him? Even so no one knows the things of God except the Spirit of God. Now we have received, not the spirit of the world, but the Spirit who is from God, that we might know the things that have been freely given to us by God. These things we also speak, not in words which man’s wisdom teaches but which the Holy Spirit teaches, comparing spiritual things with spiritual. But the natural man does not receive the things of the Spirit of God, for they are foolishness to him; nor can he know them, because they are spiritually discerned. But he who is spiritual judges all things, yet he himself is rightly judged by no one. For “who has known the mind of the LORD that he may instruct Him?” But we have the mind of Christ.” [Emphasis mine]

Let that realisation take hold of you today: if you’re born-again, you are already righteous in Christ Jesus!