PEACE IS THE OXYGEN OF HEAVEN 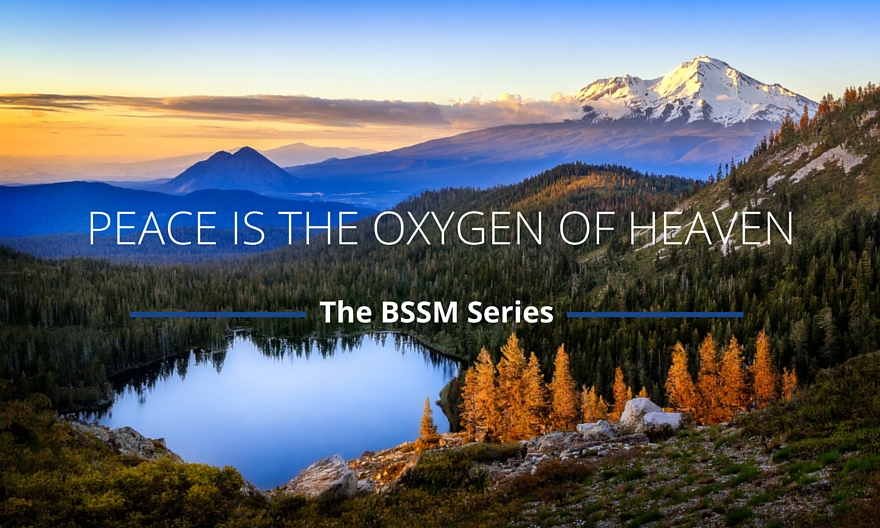 Kingdom-oriented people alter atmospheres everywhere they go. Likewise, you carry an atmosphere when you host the presence of God. You have a greater impact on your environment than you can ever imagine. When you partner with lust, bitterness, hatred etc., you release that around you. That is why it is so important to guard your heart. You were created to be in God’s presence – to experience His peace. Whatever standard you set, you will attract that. If the standard over your heart is words of strength, wisdom, love etc., you will attract that.

‘PEACE IS THE OXYGEN OF HEAVEN’: BSSM LECTURE NOTES

We need to co-labor with the Lord. There are two main seasons in life. In the one season, we need to be still. In the other season, we are called to be a warrior. It takes wisdom to discern between the two.

God says, “Stand still and see the salvation of the Lord.” That means that you just need to be still – you don’t need to do anything else. In fact, your involvement may even delay the season. Marc 10 says that unless you receive the Kingdom like a child, you cannot enter it.

Season 2: Be a warrior

During this season, God wants to go into battle with you. He will not move unless you do. Matthew 11 says that “the Kingdom of Heaven suffers violence and the violent take it by force.” During this season, you need to get your armor ready and fight like a warrior.

Know the moment and the season you are in.

THE DISCIPLES BELONGED BEFORE THEY BELIEVED

The world that Jesus dwelt in had no storms. Jesus actually dwelt in heaven while He was on earth.

You have authority over every storm. You can sleep in a storm. Have faith to protect your PEACE. Peace is the oxygen of heaven.

3 Stories that shows the aspects of the renewed mind

1. The story of Jesus rebuking the storm

“And a great windstorm arose, and the waves beat into the boat, so that it was already filling. But He was in the stern, asleep on a pillow. And they awoke Him and said to Him, “Teacher, do You not care that we are perishing?” Then He arose and rebuked the wind, and said to the sea, “Peace, be still!” And the wind ceased and there was a great calm. But He said to them, “Why are you so fearful? How is it that you have no faith?” And they feared exceedingly, and said to one another, “Who can this be, that even the wind and the sea obey Him!”

Jesus taught His disciples that they were equipped to overcome their storm. God wanted to do something through them instead of for them. Jesus rebuked the storm because there was a demonic power over it. He released peace over it to calm it.

Some things never happen until the Word is spoken. Our very fabric is held together by the Word of God. Everything we are connected to in life is connected to God. Heaven is not just a place, it is a Person. There is no part of heaven that can separate us from the Presence of God. The reality in Jesus was greater than the environment outside of Him when He rebuked the storm. The reality that dominates us from within becomes manifested on the outside.

2. The story of the apostles sharing their day with Jesus

Don’t be a teacher that doesn’t do what you preach. You can’t communicate with words only: you also have to do things, i.e. have a personal experience to impart to others.

3. The story of Jesus walking on the water and the disciples reasoning among themselves

“And He said to them, ‘Come aside by yourselves to a deserted place and rest a while.’ For there were many coming and going, and they did not even have time to eat. So they departed to a deserted place in the boat by themselves. But the multitudes saw them departing, and many knew Him and ran there on foot from all the cities. They arrived before them and came together to Him. And Jesus, when He came out, saw a great multitude and was moved with compassion for them, because they were like sheep not having a shepherd. So He began to teach them many things. When the day was now far spent, His disciples came to Him and said, ‘This is a deserted place, and already the hour is late. Send them away, that they may go into the surrounding country and villages and buy themselves bread; for they have nothing to eat.’ But He answered and said to them, ‘You give them something to eat.’ And they said to Him, ‘Shall we go and buy two hundred denarii worth of bread and give them something to eat?’

Your biggest trail is not when there is the biggest problem, but when you have your greatest success. You need to take time and protect your boundaries because ministry can be draining.

Further on we read:

“Immediately He made His disciples get into the boat and go before Him to the other side, to Beth-sāi-da, while He sent the multitude away. And when He had sent them away, He departed to the mountain to pray. Now when evening came, the boat was in the middle of the sea; and He was alone on the land. Then He saw them straining at rowing, for the wind was against them. Now about the fourth watch of the night He came to them, walking on the sea, and would have passed them by. And when they saw Him walking on the sea, they supposed it was a ghost, and cried out; for they all saw Him and were troubled. But immediately He talked with them and said to them, ‘Be of good cheer! It is I; do not be afraid.’ Then He went up into the boat to them, and the wind ceased. And they were greatly amazed in themselves beyond measure, and marveled. For they had not understood about the loaves, because their heart was hardened.”

(The book of Mark is very helpful if you are interested in the subject of renewing your mind.)